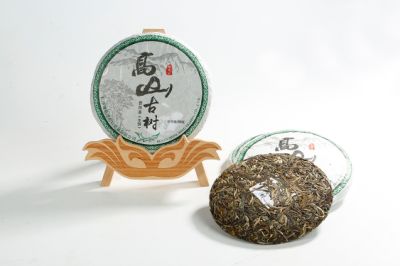 Pu'er or puerh tea is a variety of fermented tea produced in Yunnan province, China, and named after the town of Pu'er.Fermentation in the context of tea production involves microbial fermentation and oxidation of the tea leaves, after they have been dried and rolled.This process is a Chinese specialty and produces tea known as heicha, commonly translated as dark or black tea. This type of tea is different from what in the West is known as black tea, which in China is called hongcha  i.e. red tea. The best known variety of this category of tea is pu'er from Yunnan Province, named after the trading post for dark tea during imperial China.
Pu Er tea traditionally begins as a raw product known as rough maocha and can be sold in this form or pressed into a number of shapes and sold as raw shengcha. Both of these forms then undergo the complex process of gradual fermentation and maturation with time. The wodui fermentation process developed in 1973 by the Kunming Tea Factory created a new type of pu'er tea. This process involves an accelerated fermentation into ripe shucha which is then stored loose or pressed into various shapes. The fermentation process was adopted at the Menghai Tea Factory shortly after and technically developed there.The legitimacy of shucha is disputed by some traditionalists in contrast to aged teas. All types of pu'er can be stored to mature before consumption, which is why it is commonly labelled with the year and region of production.

Send your message to this supplier

People who viewed this also viewed